June 29, 2022 – In the United States, trucks represent 12 percent of total road fatalities, but trucks themselves are only 4 percent of the vehicles operating on the road. Truck fatalities are this high because drivers of large vehicles have limited visibility, making it difficult to make the safest choices. The solution? Cab-over truck design that offers drivers direct vision, according to panelists at Together for Safer Roads (TSR)’s recent second annual Vision Zero Fleet Forum.

“The evidence is clear that blind spots are not only affecting the safety of truck drivers when disembarking a vehicle in the course of work, but also vulnerable road users, such as pedestrians, children and bicyclists,” said Alex Johnston, CEO of Cities Reimagined, who moderated the discussion on blind zones for truck drivers and solutions, most notably, the advantages of cab-over truck design, rather than conventional front-engine truck design. Blind spots are not only affecting the safety of truck drivers, but also vulnerable road users.

Conventionally designed trucks have less risk driving on interstates, though when used in urban environments, those risks escalate, and manufacturers need to understand the differences, noted panelist Keith Kerman, chief lead officer for the City of New York and deputy commissioner at the Department of Citywide Services. “High-vision trucks are safe in both instances, but only one is safer in cities—and it’s not the conventional truck. There have been potential concerns that drivers can be at risk in high-visibility cabs, but we’ve seen no evidence of that.” 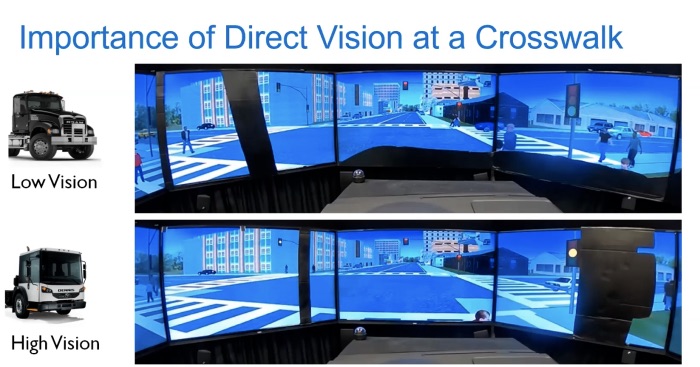 A high-vision cab (bottom) offers much more visibility compared to conventional cabs (top). The height of a conventional truck’s nose creates a blind zone for the driver, whereas a cab-over design offers a view of the stop line or a crosswalk’s proximity, as well as any pedestrians.

Panelist Sal Mastriani, vice president of Interstate Waste Services, explained further, “Blind zones are so important to us because direct visibility affects our drivers in the cities that we work in at night. One of the challenges for our truck operators is when they are at a stop sign or crosswalk. A high-vision cab offers much more visibility compared to conventional cabs. The height of a conventional truck’s nose creates a blind zone for the driver, whereas a cab-over design offers a view of the stop line or a crosswalk’s proximity, as well as any pedestrians.”

Panelist Alex Epstein, a senior engineer at the U.S. Department of Transportation’s Volpe Center, noted that blind zones for fleets have received greater attention recently and estimated that there are close to 500 fatalities related to large truck blind zones each year. “It’s an eminently solvable design issue that can be ‘engineered out.’”

Are there any correlations between distracted driving and direct vision? Epstein referenced a simulated study that showed drivers in high-vision trucks hit pedestrians less often, even when distracted, than an attentive driver in a low-vision truck. “It was a remarkable finding. I don’t know if a high-vision truck changes or reduces the level of driver distraction, but it seems—based on the research—that it more than makes up for whether or not the driver is distracted.

“With the cab-over design, it allows our drivers and helpers to see much clearer, especially when it rains and in dark areas, in an effort to reduce incidents and injuries. And we’ve seen a reduction in both of those.”

Truck drivers initially resist cab-over design
Headwinds facing the adoption of cab-over design are critics who are often “traditionalists,” used to operating a conventional front-engine cab, said panelist Andy Graves, of truck manufacturer Dennis Eagle based in the U.K., whose primary area of interest are municipal vehicles working in urban areas. “We saw very early on the need to have good cab visibility and suitable lower entries to limit falls and trips outside vehicles.” Lower points of entry can lead to less driver injury.

Trials conducted in London found that those traditionalists often quickly discovered how much easier it was to operate trucks with lower points of entry—and have better visibility. “It was so much better because they didn’t have to work so hard to see all the obstacles they encountered driving. Cab-over trucks made their lives easier.”

Aftermarket retrofits can affect visibility
Challenges have surfaced with aftermarket technology being added to trucks, according to Mastriani. “From cameras and route optimization tools to mirrors and phone devices, it becomes difficult as to where they all fit. We’re pushing for manufacturers to include those technologies with each unit and be part of the purchase agreement, instead of fleets adding them afterward.”

Kerman concurred and said that retrofitting trucks has its challenges. “We’re having the same issues with trying to do retrofits, most recently with a surround camera project. And there are other challenges, such as how many techs can you place in a truck so it actually becomes safer. That’s why designing a vehicle up front by the manufacturer is the best solution. And as we move closer to electrification, the design of an electrified truck changes, anyway. There’s no engine, so batteries can be placed in a number of places—there’s good potential to join the electrification of trucks with a redesign for safety. But unfortunately, that’s not necessarily happening. Electric school buses that aren’t high-vision are a case in point. As we push for electrification, we must also push for high-vision design.”

He added that New York City has launched its Safe Fleet program, which is a comprehensive effort to redesign vehicles for safety. “From front to back, we’re thinking about vehicle design in every possible way.”

A core part of that program, Kerman said, is direct vision. “We think there’s an enormous opportunity to improve safety from design to operation without giving up anything. Vehicles can be redesigned in ways that we know the industry can do it, and make them a lot safer. We’ve just announced a policy to adopt more high-vision trucks, but we need to see more options from manufacturers in the marketplace.”

New tool allows fleets to assess cab visibility
A new tool, Blind Zone Calculator (or VIEW app), being developed by the Volpe Center is being designed to help fleet owners and operators understand the size and impacts of their blind zones. It requires only a smartphone and a five-foot pool used to calibrate a photo from the driver’s seat. The Blind Zone Calculator (or VIEW app) requires only a smartphone and a five-foot pole.

“Estimated blind zones can be converted into how many vulnerable road users fit within those blind zones,” explained Epstein. “For example, 37 adults could fit in a high-vision truck blind zone—from the front and to the right of a truck—but that compares to 155 fitting into the blind zone of a low-vision truck. Using the tool’s information, fleets can begin to map out and start to think about where their trucks need to operate according to their environments, such as if they’ll be in tight spaces. It will also help fleets make decisions when buying trucks: it’s not a complicated process and takes about only ten minutes.”

As an industry group, fleets must explain to manufacturers exactly what they need in their trucks, Mastriani said. “Once a driver goes into a cab-over designed truck, they don’t want to go back into a conventional-cab truck, because it removes many of the concerns they have: number one, they want the improved visibility; and, two, the increased maneuverability of a cab-over is better than the conventional—today’s status quo must be challenged.”