Pioneering study uses traffic cameras and AI to predict future, promising to save lives and money

This special series focuses on important community issues, innovative solutions to societal challenges, and people and non-profit groups making an impact through technology. 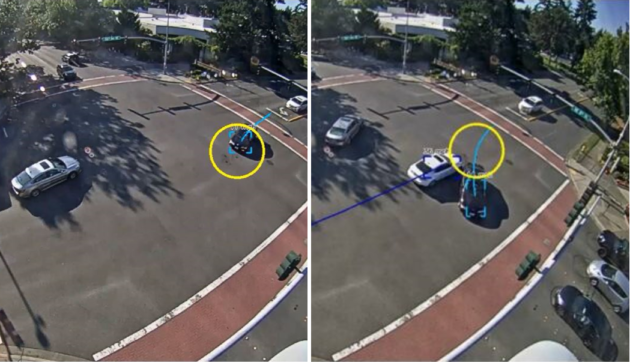 Bellevue’s traffic cameras captured near miss events, tracking the speed and direction of vehicles, and by how many seconds they missed colliding. (City of Bellevue and Transoft Photos)

In an effort to prevent deaths and injuries caused by crashes between vehicles, bikes and pedestrians, the city of Bellevue, Wash., set out more than five years ago to foresee the future. The idea was to use machine learning to analyze thousands of hours of video collected by 360-degree traffic cameras already installed citywide to identify potential crash hot spots and tease out dangerous traffic patterns.

The city this week shared its first batch of reports from the groundbreaking program, which has drawn comparisons to “Minority Report,” the 2002 film in which Tom Cruise anticipates and preemptively stops crime.

“Bellevue is leading the way on this,” said Roger Millar, Washington Secretary of Transportation. “The analytics and AI going into it is doing a lot to predict and eliminate crashes.”

Bellevue is leading the way on this. The analytics and AI going into it is doing a lot to predict and eliminate crashes.

The project could aid Bellevue and other communities internationally that are aiming for “Vision Zero” — a strategy started in Sweden with the goal of eliminating deaths and serious injuries from traffic collisions.

The Bellevue Department of Transportation project examined collision close calls for vehicles, cyclists and walkers and calculated vehicle speeds. The study demonstrated a strong correlation between real-life crashes and the near misses detected from the deep neural network, validating the usefulness of the approach. It found overall traffic safety trends as well as identifying the most dangerous intersections.

Vancouver, B.C.-based Transoft Solutions, a transportation technology company, did the video analysis. The non-profit Together for Safer Roads paid for the study.

In the U.S., road crashes are the leading cause of death for people age 54 and younger. Nearly 40,000 people die annually in crashes and 4.4 million suffer injuries that require medical attention. In addition to the loss of human life, collisions rack up billions of dollars in public and private costs, including medical care, emergency services, property damage, lawsuits and lost workplace productivity.