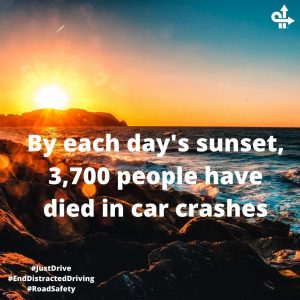 There’s no question that road crashes have a devastating impact on victims and their families. The World Health Organization states that road crashes kill 1.4 million people and injure 20 to 50 million people every year. Road crashes also bear a heavy economic cost. According to statistics from the our expert panel white paper “Investing in Road Safety: A Global Imperative for the Private Sector,” crashes come at a cost of USD $518 billion per year to the global economy. The White Paper outlines these eye-opening statistics on the cost of crashes.

2. The effects are pervasive.

In the United States, motor vehicle crashes cost USD $242 billion per year. That breaks down in the following ways:

3. On-the-job deaths leave a huge void at home and on the job.

In the U.S. alone, road crashes are the number one reason for on-the-job deaths. Annually, 2,100 people die and 353,000 are injured in crashes while working, according to the International Labor Organization. In the U.S., direct costs for a single traffic fatality are approximately USD$1.4 million, according to the NHTSA. A majority of those costs—87 percent—are connected to lost productivity at work and at home.

Road crashes have an impact that reverberates through every sector and every country. If businesses work together to help improve road safety, the benefits will spread throughout the economy, with the potential to help a company’s own bottom line.